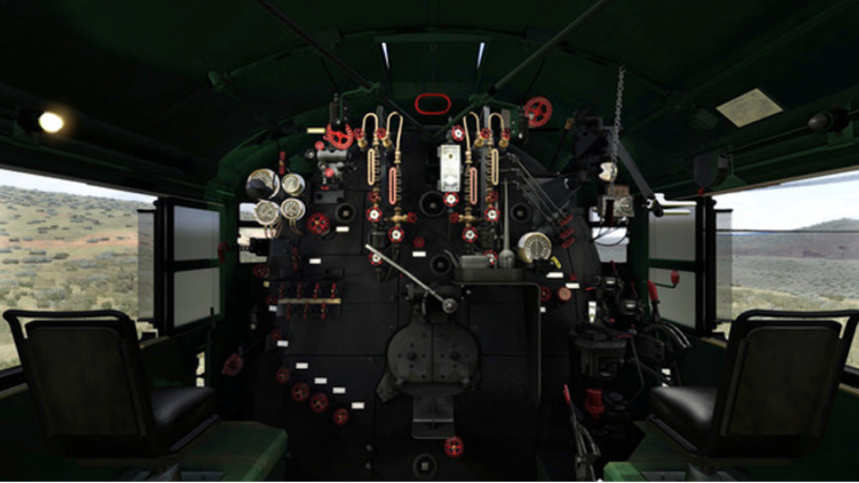 You Too Can Drive a Big Boy

Written by Vanessa Zard on 12th August, 2021. Posted in Blog

You are at the controls of a Union Pacific Big Boy, the largest steam locomotive in the world. Using the interactive levers, valves and gauges in this Train Simulator, you too can drive a Big Boy. You have 7,000 horsepower at your command. Are you ready for the challenge?

The Train Simulator, developed by Dovetail Games, allows you to try your hand at driving a variety of locomotives. The aim of the game is to demonstrate your skill at operating the controls, mastering safety systems, learning routes and adapting your driving style to a range of different trains.

Virtual Big Boy
In May this year, Dovetail Games launched a new Union Pacific Big Boy add-on, created for the Train Simulator by the third-party developers Smokebox. Available on the gaming portal Steam, it promises an immersive 3D cab experience, including audio-visual details. If you doubt your ability, you can choose an auto-fireman and auto-engineer to assist you. If you are geared up for a greater challenge, you can manually drive the virtual Big Boy. You can even go for training at the Train Simulator Academy.

After configuring the game’s difficulty settings, you are ready to put your locomotive skills to the test. You can choose from a host of different scenarios. These include hauling freight, undertaking time-pressured missions with penalties or opting for more relaxed ‘Quick Drive’ sessions where you can select route, season, weather and time of day.

The only operating Big Boy dwarfs our author Ian Logan during his visit to see the locomotive on 9th October 2019.

Real Big Boy
Between 1941 and 1944 the Union Pacific Railroad bought 25 Big Boy locomotives from the American Locomotive Company in Schenectady, New York. Eight have survived. One of those is in steam. Union Pacific spent two and a half years restoring Big Boy 4014 to working order and in May 2019 returned it to service to mark the 150th anniversary of the first transcontinental railway. After a year locked up during the pandemic, 4014 is this month back out on the rails. From 5th August to 7th September 2021, it is steaming through 10 states on a much-anticipated tour of the American Southwest. Ed Dickens, head of the Union Pacific steam team, is in the engineer’s seat, demonstrating his mastery of 1940s technology. For any trainee steam engineer, he is the role model.

One member of Ed Dickens’ team is photographed by another with Ian Logan’s camera in the cab of Big Boy 4014.

Thanks to our author Ian Logan, who went to see Big Boy 4014 just before the pandemic, we can offer you a view inside the cab of the one and only operating Big Boy. Ian Logan passed his camera up to the crew and they took a series of highly detailed photographs. Here is an example. You can see 10 more in our article Inside the Cab of Big Boy 4104.

Dovetail Games
Train Simulator has been the flagship game of the UK developers Dovetail Games since their formation in 2009. Specializing in the creation of ‘digital hobbies’, Dovetail Games faithfully recreate real-world experiences in digital form.

Dovetail Games can even go one better. While in the real world you can drive only one Big Boy, in the virtual world of the Train Simulator you have the entire 4000-class fleet at your disposal, including the 17 that were scrapped. Before setting off on your journey, you can change the number of the locomotive, scrolling from 4000 to 4025 and so, if you wish, reverse the course of history.

We Are Railfans have designed themselves a memorable railway logo.

We Are Railfans
In April 2021, Dovetail Games joined forces with an international community of enthusiasts called We Are Railfans to organize the railway equivalent of an online literary festival. Called Railfan Fest 2021, the two-day event featured talks and interviews with game developers, authors and film makers which were broadcast to a daily audience of 12,000. Viewers who tuned in were able to get a behind-the-scenes look at some of the features of the Train Simulator, including an insight into what tools, programmes and techniques the company uses to achieve such remarkable levels of realism.

You can watch the interview Railroads and the American Dream on YouTube.

One event that proved popular at the Railfan Fest was the interview by the We Are Railfans presenter Joe Rogers of Ian Logan, co-author of our new book Logomotive: Railroad Graphics and the American Dream. Ian has been photographing American railroads, their logos and liveries since the late 1960s. To hear him discussing his romance with American rail and his first-hand experience of crossing the USA by train in the 1970s, watch Railroads and the American Dream. ‘We tuned in for a few hours each day,’ wrote one viewer after the event. ‘I don’t know if it was you [Joe] who interviewed Ian Logan, but that really stood out for me, particularly with all the talk about graphics and liveries.’

You can buy the Union Pacific Big Boy Loco add-on for the Train Simulator from the Steam portal.

To hear more about driving a virtual train, listen to this We Are Railfans interview.

To obtain Ian Logan’s book Logomotive, you can order it from the UK or the US.

On the frontispiece of Logomotive, you see the Missouri Pacific eagle. Ian Logan found this logo painted on the side of a diesel locomotive. Its Art Deco speed lines symbolize the dynamism that United the States of America.