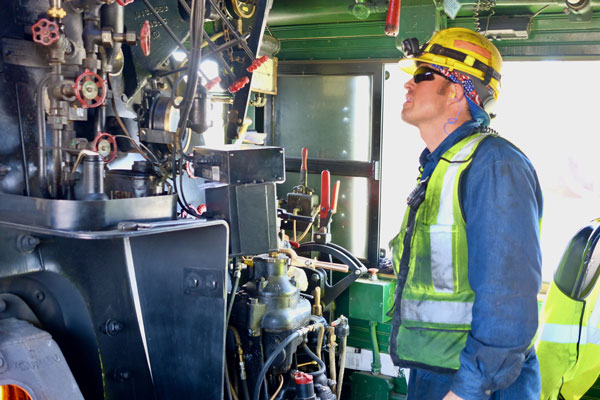 Written by Sheldrake Editor on 20th July, 2021. Posted in Blog

Big Boy is warmed up. It’s been out on test runs. On 5th August it will depart Cheyenne, Wyoming on a month-long tour through 10 Southwestern states. Thanks to the steam team led by Ed Dickens, we can take you inside the cab of Big Boy 4014 and give you a feel for what it is like to operate the biggest steam locomotive in the world.

While working on his new book Logomotive, the designer and photographer Ian Logan was keenly anticipating the return to steam of Big Boy 4014. Knowing the locomotive would be in California in the autumn of 2019, he flew to Los Angeles and booked a viewing at the West Colton yard. On 9th October, a day to remember, he and a friend were able to stand alongside the locomotive and photograph it close up. ‘You could feel the heat,’ he said. Every time another train came into the yard, the crew in Big Boy’s cab blew the whistle.

There were six men in the cab. Being naturally forward, Ian passed his camera up to them and asked them to take photographs inside. Here are their shots as the crewmen chose to take them. You can sense the pride and excitement of being at the controls of a living, breathing machine generating 7,000 horsepower.

A removable stainless-steel number plate fitted by Union Pacific on the floor of the Big Boy cab allows access to air brakes and fuel lines.

A love of logos and locos
Ian Logan got hooked on American railroad graphics in the late 1960s. He spent years photographing logos on the sides of trains. In the process, he acquired his own hit list of favourite locomotives, especially the E9 and F9 diesels. A Big Boy steam locomotive is a whole lot bigger and far more powerful than any American diesel, so when the Union Pacific Railroad brought Big Boy 4014 back to life for the 150th anniversary of the first transcontinental railroad in 2019, Ian knew he had to make a special trip to see it.

What is a Big Boy?
Big Boy 4014 was one of 25 4-8-8-4 locomotives built by the Union Pacific Railroad in the 1940s to haul freight trains over the Wasatch Mountains in Utah. Rather than have helper engines waiting to pull a heavy train up the Wasatch grade, the Union Pacific designed two locomotives in one. Essentially it was one boiler with two engines underneath, articulated in the middle so it could get round corners. The 4-8-8-4 refers to the wheel arrangement of this, the biggest steam locomotive ever built: four pilot wheels to guide it along the track, two sets of eight driving wheels and four trailing wheels to support the weight of the firebox, which is the size of a suburban sitting room. This is the giant of giants, the ultimate muscle machine, 132 ft long, weighing 600 tons and developing 7,000 horsepower. It was going to have been called the Wasatch series, but when the first locomotive, No. 4000, was under construction at the American Locomotive Company, a worker scrawled Big Boy in chalk on the smokebox door and the name stuck.

Condemned and reprieved
Big Boy 4014 was retired in 1959 and sent for scrap. At the last minute it was saved by the Railgiants Train Museum in California and put on static display. For 60 years it sat cold and silent, picking up pine needles from the conifers it was parked next to. The cab remained intact but forlorn. The contrast with the restored engine could not be more striking. On the one hand you see a superseded technology gently rusting into history; on the other, a living, breathing machine responding to the commands of a full crew, ready and able to draw a 25-car passenger excursion train up a gradient like the Cajon Pass, which it did just after Ian Logan visited it.

The Interactive Backhead Photo on the Railgiants Museum website allows you to hover over each feature and read a description.

The transformation of the cab wrought during the restoration is complete, with the backhead sandblasted down to bare metal and repainted, the manifold and firebox converted to oil, the whole thing alive again.

The Railgiants Train Museum have recently reinstated an interactive diagram of the Big Boy backhead on their website allowing you to hover over each dial, valve or control lever and read its name and function. What you see here is the cab as it was when the locomotive was coal fired. During its restoration and conversion to oil in 2016-19, the steam team moved a number of dials around and changed some of the valves to perform new functions. The grate and manifold are of course different. Nevertheless, the diagram has proved enormously popular and it is still a valuable introduction to the operation of a steam locomotive for anyone who has not driven one! To use the diagram, go to the Railgiants’ Interactive Backhead Photo.

In 2013 Union Pacific bought the locomotive back and in two and a half years from 2016 restored it at their steam shop in Cheyenne. In May 2019 the head of the Union Pacific steam team, Ed Dickens, proudly fired it up, tested it and drove it to Ogden in Utah to celebrate the 150th anniversary of the first transcontinental railway. During the summer and autumn he ran excursions all over the Southwest to celebrate the locomotive’s return to steam. Retired railwaymen wept to see it thundering by, having believed they would never experience one of these Big Boys in service again.

Union Pacific estimate that 1.1 million people turned out to see Big Boy 4014 in 2019. Planned excursions in 2020 were cancelled because of the coronavirus pandemic. This year, infections permitting, Big Boy will depart Cheyenne, Wyoming, on Thursday 5th August, travelling through Arkansas, Colorado, Kansas, Illinois, Louisiana, Missouri, Nebraska, Oklahoma, Texas and back to Wyoming. For details of overnight and whistle stops, consult the Official Union Pacific Steam Club.

You can see numerous videos of the locomotive in action in Big Boy 4014 Comeback.

The last chapter of Ian Logan’s book Logomotive: Railroad Graphics and the American Dream opens with a wonderful full-page photograph of Big Boy 4014, taken by the Chicago photographer Mike Raia during the 2019 celebrations.

See more of Ian Logan’s pictures
Find out more about Ian Logan and his secret romance with logos and locos by clicking here.

If you are based in the UK can order Ian Logan’s book from this website. In the US you can order it from our Chicago warehouse or from local retailers.

The sheer scale of Big Boy, 132 feet long, 17 feet tall and 11 ½ feet wide, is apparent when you see Ian Logan dwarfed beside the sitting-room-sized firebox and the last four of the 16 driving wheels.