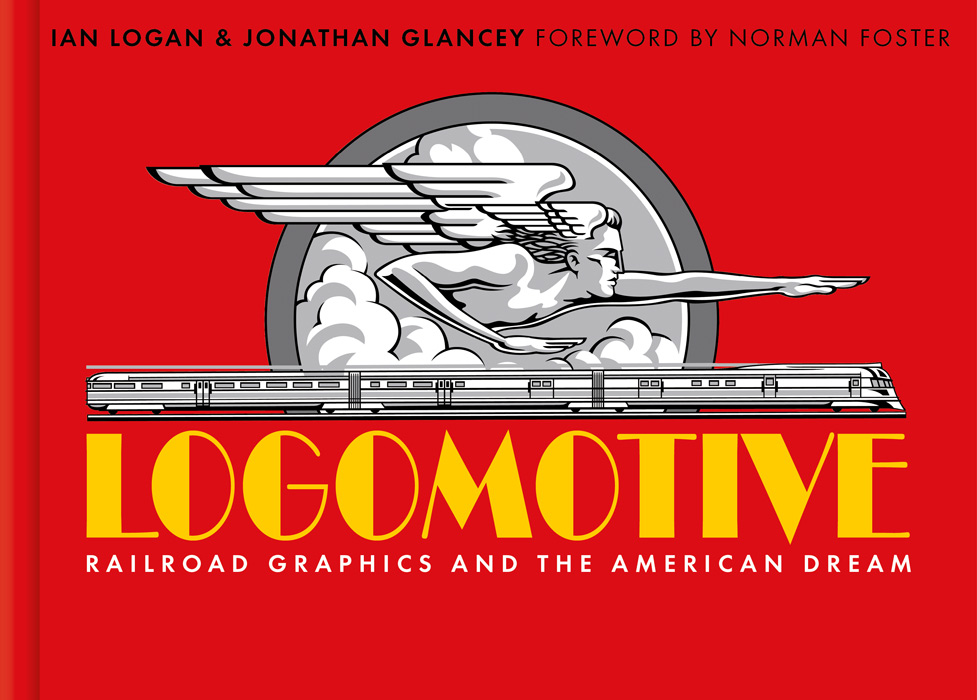 For the Love of Logos

Written by Sheldrake Editor on 30th October, 2020. Posted in News

The designer Ian Logan fell in love with railroad logos on his first trip to America in 1968. The design critic Jonathan Glancey and the architect Norman Foster love logos, too, and all that goes with them including loco design, station design, colour, graphics and lifestyle. For the love of logos, they have written Logomotive.

It seemed obvious to us that a book about logos should have a logo on the cover. But which? Logo design reached its apogee in the mid-century heyday of the American railroads. Unlike British railways, which were consolidated into the Big Four in 1923 and nationalized into one in 1948, American railroads continued to thrive as independent businesses until the 1970s, and each had its own logo or iterations of its logo. We had hundreds to choose from.

Looking for the right logo
When the 1881 Trademark Act came into force, railroads across America rushed to brand themselves in a memorable fashion. Union Pacific asked their passenger agent Edward L. Lomax to come up with a fresh design. He said he had to make hundreds of pencil sketches before he found just the right logo for the company, the famous shield that is still in use today.

We have been through a similar process to find a find a logo for Logomotive. To start with, Ian Logan sketched a locomotive-and-lozenge graphic and asked an illustrator friend to work it up into a colour logo. Later they added a banner bearing the legend Burnished Steel, an early choice of title. Critics said these designs were more locos than logos.

Ian Logan’s loco logo is embellished with a scroll bearing a working title.

Ian Logan sketched a loco-and-lozenge logo and had it made up in colour.

Pure graphic
Next we looked for a pure graphic such as the eagle of the Missouri Pacific or the Hiawatha of the Milwaukee Road, but feared we would offend the partisans of other railroads.

The speed-lined eagle of the Missouri Pacific Railroad dominates this bold cover design.

Multi-logo approach
Rather than choose a single company’s emblem, we tried running many behind the title. Critics thought these designs were too dark, too masculine.

The logos of numerous companies are displayed beneath a one-line title.

Here is a multi-logo approach with the title set in broken type on two lines.

This multi-logo design carries the title set on two lines in an unbroken font.

Ball and bar
Next we explored the concept of creating a logo out of the book title itself and, for an authentic look, applying it to the side of a wagon. We roughed up some ideas based on the logo of the Chicago and North Western Railway. In the background, to capture the mood, would be some nicely rusting steel.  We considered having a cut-away in the cover board, to reveal the logos printed on the endpapers underneath.

The title and sub-title of the book are made up into a ball-and-bar motif.

This logo is known in railway circles as a ball-and-bar design.

We then prepared some more highly developed variations of the ball-and-bar logo, refining the typography and trying out different steel backgrounds, but the sales reps professed themselves underwhelmed by this whole approach.

The ball-and-bar motif appears to be painted on a rusty Rock Island boxcar.

Here the title and sub-title are designed to look as if painted on a green boxcar.

Echoing iron-plate construction, the ball-and-bar is displayed with rows of rivets.

In this design the title graphic is circular and the background burnished steel.

Brighter
In search of a brighter look we produced some designs based on locomotive liveries. These templates are based loosely on the colourful nose-cone liveries of the Florida East Coast’s and other companies’ diesel locomotives. They had few takers.

This design repeats the ball-and-bar motif.

Here the title is made into a circular graphic.

Try something else
At this stage we concluded that what the designs had so far failed to get across was the romantic aspect of railroad travel and graphics, which reached its apogee in the golden age of the streamliners in the 1930s. The art director and designer of the book, Bernard Higton, then produced a striking design inspired by a 1934 promotional sketch for the Chicago, Burlington & Quincy Railroad. Bernard adapted the graphic and placed it on a strong red background with the title in an Art Deco font beneath it. This secured instant approval from both editors and reps.

Zephyrus, god of the west wind, points to a streamlined future above a speeding, three-car diesel express.

Upgrade needed
The original artwork is memorable and full of energy, but in technical skill it is somewhat lacking. Held in the archives of the Newberry Library in Chicago, it is variously described as a sketch or painting. On close examination it leaves much to be desired. It would never be good enough to use on the cover of Logomotive, so Bernard commissioned Neil Gower, an artist with a feel for the period, probably best known his Bill Bryson book covers, to redraw it. His brief was to produce a stronger, simpler design that retained an authentic Art Deco look.

In Test 1 Zephyrus is drawn in a bold, Germanic style the Art Director thought could look somewhat too brutal.

In Test 2 the artist has softened the sharp angles, remodelled the profile and added a tint to define the shading.

Neil Gower produced two test pieces to show the different styles he could adopt: sharper or softer. It was decided to go for something in between, and this is what you see on the cover.

The final artwork combines elements of both tests.

Logos galore
Logomotive: Railroad Graphics and the American Dream is now complete. If you’re into logos, branding, graphics, slogans, engineering design, billboards, station architecture, advertising, typography or period ephemera, from posters and postcards to badges, tickets and timetables, you could find this utterly absorbing. It is the story of a great industry in its heyday, when the Pennsylvania Railroad was the most valuable company in the world, told by a designer, a design critic and an architect who share a love of logos.

On the cover of Logomotive the god of the west wind points to a streamlined future above a speeding Burlington Zephyr three-car, diesel express. Cover design by Bernard Higton, illustration by Neil Gower.

Full details of Logomotive are here.

The order book is open
In the UK we publish Logomotive with on 10th December 2020. If you pre-order, you will get priority service and receive your copy at the same time as the shops.

In the US Logomotive will be released through Independent Publishers Group on 21st April 2021, in good time for Father’s Day.

To get your copy in the UK and Europe, pre-order here.

To order in the US or Canada, please write to and ask us to reserve a copy for you, using the subject heading: Logomotive Advance Order. We’ll make sure your order is processed and that you receive your copy at the same time as the bookstores.