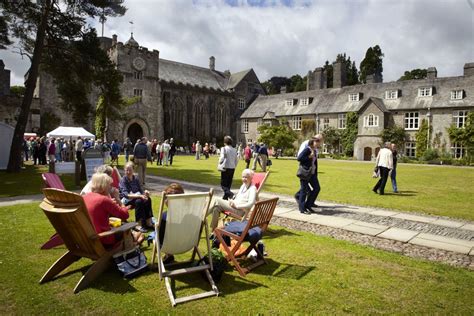 Writers and Readers Gather in Devon

Written by Sheldrake Editor on 2nd July, 2018. Posted in News

Discussions in the garden, talks in the Great Hall, the Barn and the Dukes Room, word schools, poetry breakfasts, story-telling, comedy events, theatrical performances: words and ideas in all their forms and combinations are on offer at Ways With Words, the literary festival that’s held this July in the idyllic setting of Dartington Hall.

Utopian experiment
Dartington Hall is more than a 14th-century landed estate in Devon. It is the site of a bold experiment in progressive education and rural regeneration. It was saved from dereliction in 1925 by the English visionary Leonard Elmhirst and his wife Dorothy, an American heiress. They set up Dartington Glass to bring employment to the local area and Dartington Hall School to break the mould of Rugby-style boarding schools. Pupils learned as much by working on the estate as sitting in the classroom. There was to be ‘no corporal punishment, indeed no punishment at all. No prefects, no uniforms, no Officers’ Training Corps; no segregation of the sexes; no compulsory games or compulsory anything else’.

The line of distinguished ex-pupils runs from Lucien Freud and Oliver Postgate to Michael Young, inventor of the term meritocracy, who was ennobled as Lord Young of Dartington. Years afterwards he confessed to being startled when he first went into the showers and found himself standing next to a naked girl. At its height the school had 300 pupils. It later ran into controversy and closed in 1987.

Today Dartington Hall is known for other activities promoting social justice and sustainability, for its literary festival and its ambience, a cross between an Oxford college and an English garden party.

Ways with words
Two people who have a knack with words are the television presenter and science writer Adam Hart-Davis, who will be speaking in the Barn on 13th July, and the subject of his latest book Very Heath Robinson. Although Heath Robinson made his name from drawings of absurdly ingenious contraptions, he could summon up a neat turn of phrase with the same understated humour he expressed in his art. After his marriage in 1903, he and his wife moved into a furnished flat. It was at the top of a tall building at the side of a music hall. ‘Our evenings were enlivened by occasional bursts of applause which we could hear through the wall separating us from the theatre,’ he wrote in his 1938 autobiography My Line of Life. ‘When we were entertaining, the applause would sometimes occur at inopportune moments, and make an unexpected commentary on the conversation. It was disconcerting, for instance, when, in the polite pause following a guest’s declining a second helping, a burst of clapping intervened’ (quoted in Very Heath Robinson, p. 32).

Adam Hart-Davis has his own story to tell about poor sound insulation. ‘I once stayed in a cheap hotel in San Giovanni Rotondo in south-eastern Italy. My room was on the ground floor, underneath the main ballroom. That night there was a wedding, and the noise of a thousand stiletto heels stomping the night away on the marble floor immediately above my head will stay with me forever’ (Very Heath Robinson, p. 33).

What Heath Robinson did for us
However diverting or engrossing the pictures, words are always the foundation of any book worth publishing. In Very Heath Robinson Hart-Davis regales us with stories about everything from the origin of the kitchen stove, the Hoover and the Ford motor car through to dating from the age of the chaperone to the explosive arrival of the bikini – all topics depicted by Heath Robinson but which, set in context by Hart-Davis, amount in just a few words to the story of the modern world.

To hear what Hart-Davis has to say in his talk on Heath Robinson – An Absurdly Ingenious World, book tickets here.