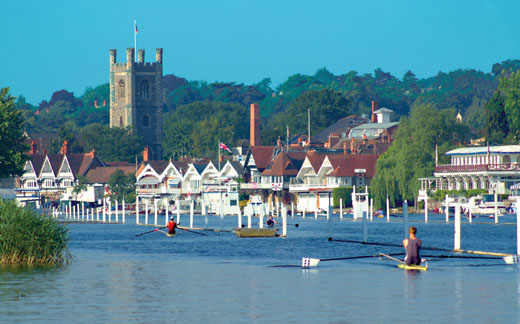 The steam launch Hibernia shows its paces on the Thames in 1894.

You don’t normally associate Henley with books, but the organizers of the Henley Literary Festival are seeking to change that. This year’s festival will be the biggest, running for nine days from 29th September to 7th October and featuring more than 150 events, including author talks, performances, workshops and readings. In keeping with the town’s riparian tradition, you can even enjoy river readings on board The Hibernia, named after an 1894 steam launch which famously could reach 29 m.p.h., twice the speed of the fastest eight.

Historic venues
Apart from the river, Henley has magnificent venues for the festival talks including Phyllis Court, an 18th-century mansion with lawns sweeping down to the water’s edge, the Town Hall built to commemorate Queen Victoria’s diamond jubilee and the Kenton Theatre, opened in 1805. It is one of the oldest working theatres in the UK, ranked fourth after the Bristol Old Vic (1766), the Theatre Royal, Drury Lane (1771) and the Grand Theatre, Lancaster (1782).

A glass and iron canopy ornamented with fine globe lanterns graces the façade of the Kenton Theatre in Henley, where Adam Hart-Davis will be speaking on 5th October.

Spectacular line-up
Among this year’s speakers are Sebastian Faulks, John Simpson, Max Hastings, Michael Morpurgo, Louis de Bernières, A. N. Wilson, Paddy Ashdown and Anthony Horowitz, to name just a few. At Christ Church will be Frederick Forsyth, who has sold the astonishing total of more than 75 million books; at Phyllis Court Judith Kerr, at the age of 95 celebrating the 50th anniversary of The Tiger Who Came to Tea; and at the Kenton Theatre Jane Hawking, talking about her memoir of life with Stephen Hawking and how it was made into the film The Theory of Everything.

Also at the Kenton Theatre, the television presenter and science writer Adam Hart-Davis will be presenting the comic drawings of Heath Robinson, whose work he has loved since childhood. Instantly recognizable in his bright and eccentric clothes, Adam Hart-Davis made his name presenting shows such as What the Romans Did for Us and Local Heroes. At the Henley Literary Festival he will show funny pictures and explain why Romans are seen arriving on the beach at Deal with gifts of Hovis – dona ferentes, in the famous phrase – and why it was necessary to invent the Threesome Bath, as well as more technical and social historical topics found in his latest book Very Heath Robinson.

Dating back to the 18th century the Bell Bookshop has a charming shopfront that exemplifies the traditional streetscape of Henley.

Adam will be speaking in the Kenton Theatre at 4.30 p.m. on Friday 5th October and you can buy tickets here.

Copies of Adam’s book Very Heath Robinson will be available with a special festival discount of 25% in the Bell Bookshop, bookselling partner of the Henley Literary Festival, which will be giving away an original Heath Robinson print worth £15 with every copy sold (Details of Henley Festival Offer).

Henley man
Adam Hart-Davis was brought up in and around Henley. He recalls swimming across the river, boating and punting and sneaking through the hedge to play a surreptitious round on Henley golf course. You can read about these and other exploits of the flamboyant television presenter in Memories of Henley.