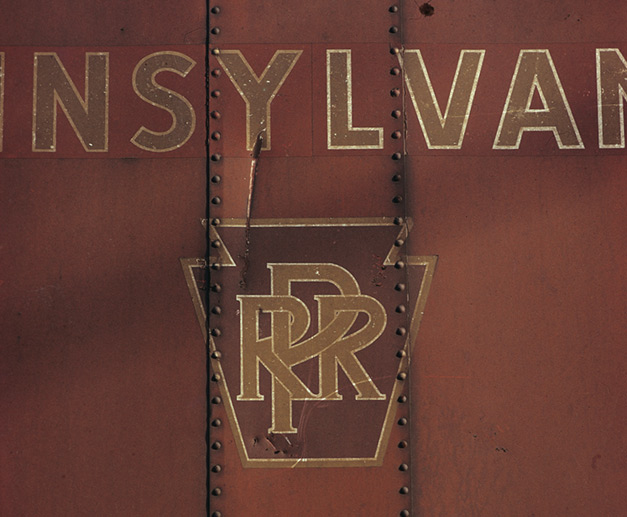 Written by Sheldrake Editor on 18th June, 2021. Posted in News

When Andrew Carnegie was just 24 he had risen to division superintendent of the Pennsylvania Railroad, then the world’s biggest corporation. Its famous keystone logo is seen here in a photograph taken by Ian Logan. Carnegie went on to become one of those immortals of American industry. By the time he sold his steel company in 1901, he had enough money to fund libraries all over the world, including in Stafford.

Ian Logan Jonathan Glancey appear on the cover of their book.

Father’s Day Book Chat
To celebrate Father’s Day, Ian Logan and Jonathan Glancey will be giving a Book Chat about American trains for Staffordshire Libraries. This weekend you can hear the pair of them discuss their latest book, Logomotive: Railroad Graphics and the American Dream. Introduced by the celebrated architect Noman Foster, it is not just another railway history following on the heels of hundreds. It is something radically new, a celebration of some of the greatest graphics ever created. The talk will go live this Sunday at 3.00 p.m. To join, click here.

What’s the American connection?
Why would librarians in Stafford want to talk about trains in America? Usually, Staffordshire Libraries select works of fiction for their Book Chats. On this occasion they are branching out into non-fiction.

Their selection for Father’s Day is, you might think, a suitably male title: Logomotive is full of American muscle machines, including some of the fastest steam locomotives ever built, dating from the age of the streamliners.

The authors are both passionate followers of design. Ian Logan made his name designing fabrics for Mary Quant and Jeff Banks, then went into decorative tins, earning the soubriquet The Tin Man of Design from Terence Conran. Jonathan Glancey was architecture and design correspondent of The Guardian and writes and broadcasts with infectious enthusiasm on design subjects of every scale and configuration, from the Eiffel Tower to Concorde.

Stafford Borough Library, opened in 1913, was partly funded by Andrew Carnegie. Like so many Carnegie libraries, it is of a pleasingly distinguished design, adding poise and prestige to the civic realm. Courtesy Julia Chandler.

And what of the Carnegie library?
Designed by the Liverpool architects Briggs, Wolstenholme and Thornely, Stafford Library opened in 1913. Now, like so much of our once splendid civic realm, it has fallen victim to the lumpen conventions of concrete, steel and glass. When in 1998 the council built a forgettable new library in the centre of town, they closed the Carnegie building. In 2011 they sold it to a developer. Plans to turn it into a restaurant came to nothing and now, although it is listed Grade II, its future hangs in the balance. Its fate is a parable for the municipal philistinism that has disfigured towns across the country.

You can find out more about this listed building at at The Carnegie Legacy in England and Wales and  Historic England.

An opportunity spotted
One positive aspect of Carnegie’s legacy has survived. Carnegie was good at spotting opportunities in a time of rapid change. The onset of the coronavirus pandemic has thrown up opportunities, too, and two resourceful members of Staffordshire Libraries, Hilary Riley and Liz Gardner, spotted one. Wanting to find a way for people to continue to discuss books and reading during lockdown, they came up with the Book Chat. Streamed on Facebook, it is a virtual literary festival that allows authors to talk about their latest books.

Staffordshire Libraries Book Chat Group now has 480 members, including some in Canada, Portugal and Brazil as well as all around the UK. Their events are free and open to anyone and attract an average audience of 200.

So please join the crowd! Join their event this Sunday 20th June at 3.00 p.m. Turn up early. You need to click their Join Group button, sign up to their rules and wait to be accepted before the talk starts.