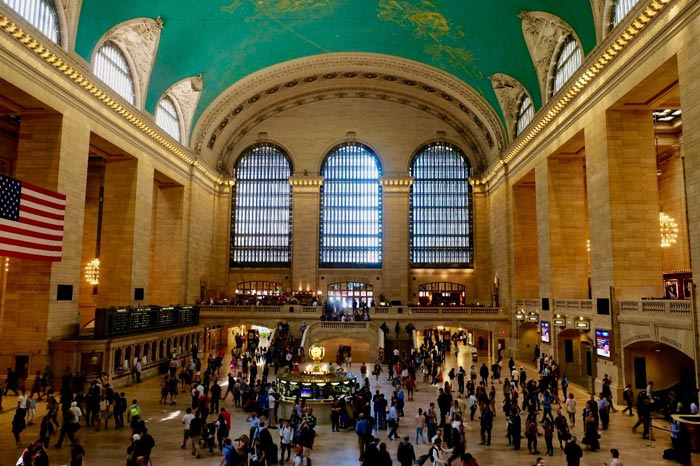 Written by Sheldrake Editor on 23rd June, 2021. Posted in News

They rolled out a red carpet at Grand Central when you boarded the overnight train to Chicago. Those were the days, says Jonathan Glancey, when rail travel was romantic. Hear this and other stories from the last days of steam by watching his Father’s Day interview, now available on YouTube.

Hilary Riley enjoys a laugh with Jonathan Glancey and Ian Logan as she interviews them on Father’s Day (watch below).

On Father’s Day Staffordshire Libraries interviewed Ian Logan and Jonathan Glancey about their new book Logomotive: Railroad Graphics and the American Dream. In the chair was Hilary Riley.

‘So, Jonathan,’ she asked, ‘you’re obviously mad keen on US trains and locomotives. Where does that come from? Why? Why America? Or is it just railways generally?’

‘I love railways, I love architecture,’ said Jonathan Glancey. ‘Like almost any Brit that can remember the first time they went to the States, probably arriving like many people, as I did, in New York, and first of all seeing the Manhattan skyline, and just like generations before me going, wow, and being awed by it, and then wanting to go to the centre of the city, and right in the centre of course, is Grand Central station.

Just one of those things
‘It’s one of those things: “You haven’t lived unless you’ve been in Grand Central!” And my God, it’s true! There, as it were, is all New York life. It feels like the centre of the world. The station has been beautifully restored, renovated, in recent years. It’s absolutely flat out. It’s a busy, busy railroad station, but it’s much more than that. It’s like a little – I say “little” – a little town of its own within this great city and it’s soul-stirring stuff. It has magnificent bars and restaurants. There’s nothing tacky or cheap or nasty. It’s really high-quality stuff. The strange thing about it, though, which is incomprehensible to British people brought up with great stations like York and others, is that the trains are underneath. They have to be in New York because of the way the city is: deep down.

‘You go down and down these ramps and find the trains hidden away in these steel and concrete and stone caverns, and then escape the city, of course, and go out into the great American landscapes. But it’s a strange thing to think of, even when the railways were at their zenith. I love to think what it would have been like taking a train from there in 1939-40 to Chicago.

Overnight train
‘The 20th Century Limited was I think the greatest train there ever was anywhere, this magnificent streamliner, steam-hauled, which I like, till quite late. You went down, down, down into this cavern following a red carpet, and there would be porters taking you to this glistening, beautifully lit train underground, and you get on and are shown to your cabin and then go to the cocktail bar, of course. And that train would then sneak out, electrically hauled for the first few miles to escape Manhattan, and then it would stop at Harmon on the Hudson River and this great streamlined locomotive would come and take you at a mile a minute overnight to Chicago.’

Soul-stirring
Wallow in more of this soul-stirring stuff, and see more of Ian Logan’s pictures, like the one of Grand Central above, by clicking here:

Journey into the past
If you are stirred by this, why not get a copy of Logomotive? It’s designed in a landscape format, with panoramic views stretching across entire pages and double-page spreads. Peer into these pictures and you alight in another place, another time. For a journey into the past, click here.