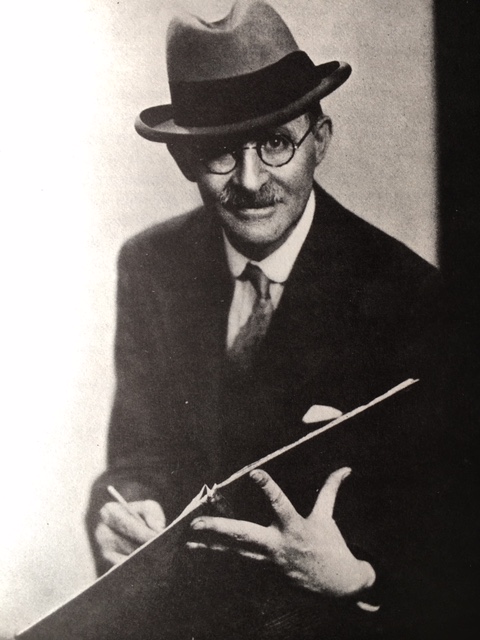 Written by Sheldrake Editor on 31st May, 2018. Posted in News

On 31st May 1872 William Heath Robinson was born in Hornsey Rise, north London. Over the next 72 years he made a huge name for himself as a humorous illustrator. He was as well known as Picasso. Going one better, he got his name in the English dictionary as both a noun and an adjective. To mark his birthday, we offer the De Luxe limited edition of our book Very Heath Robinson at a third off the published price.

The Very Heath Robinson De Luxe Edition is published at £150. For one week only, we offer this limited edition at £100, a saving of £50. The book is covered in Cherry Red cloth, blocked in silver and presented in an engraved wooden case. Each copy is signed and numbered by the author, the television presenter and science writer Adam Hart-Davis. It has a memorable Foreword by Philip Pullman, author of The Book of Dust and His Dark Materials trilogies.

Dawn of the modern age
When William Heath Robinson was born on 31st May 1872, William Gladstone was Prime Minister, the Franco-Prussian War had not long ended and the rumblings of Home Rule were starting in Ireland. Steam trains and coal fires there were aplenty, but no cars, no electricity, no telephone. Aeroplanes were decades away. Large parts of London were still orchard and field. When Heath Robinson wrote his autobiography in 1938, he could look back on his north London childhood as a sylvan prelude to a thumping, noisy technological revolution.

Butterfly catching
In those days, when Hornsey was surrounded by green fields and grazing cattle, the Robinson brothers could indulge in the sport of butterfly catching, ‘or rather trying to catch them’. After climbing Muswell Hill, past tall trees and gardens, they wandered along Colney Hatch Lane, a favourite haunt of butterflies. ‘The butterflies of North London were so swift on the wing,’ he wrote. ‘Seeming to enjoy the antics we performed with our nets in our endeavours to catch them, they sported with us rather than we with them. They have all flown long since, and together with the hedges, trees and flower-strewn verges of the lane, are no more.’

History in pictures
Looking back from the eve of the Second World War, Heath Robinson was able to say it had been ‘a laughing and jolly world for me. I may not have romped with Satyrs in the woods of Arcady, but I have had some pleasant evenings in the Crown at Stanmore.’ On a more sombre note, as he neared his end, he said to his wife Josephine, ‘I am afraid I have not left you much, but perhaps one day, my work may mean something to somebody.’

This elegiac remark is quoted in the Very Heath Robinson Limited Edition. Here you can see and assess what he left, deftly interpreted by ‘the ever great’ Adam Hart-Davis, to quote one reviewer. Modest, charming, gently satirical but ever incisive, Heath Robinson tells the story of the modern world in pictures. As Michael Rosen said recently at the opening of the Heath Robinson Museum, ‘Heath Robinson was someone who documented an era… and it’s as powerful and important as looking at a history book or reading a novel or indeed looking at great paintings.’

One week only
We thought Heath Robinson’s work was worth celebrating in a limited edition, so we produced one. We hope and believe the signed and numbered Very Heath Robinson De Luxe Edition will have value for the future, as an act of homage to Heath Robinson, a visual history of the analogue age and an artefact in its own right. It would make a special gift for a notable birthday, anniversary or Christmas. If you would like a copy at £50 off, this week only, order now. The offer ends on 7th June 2018.