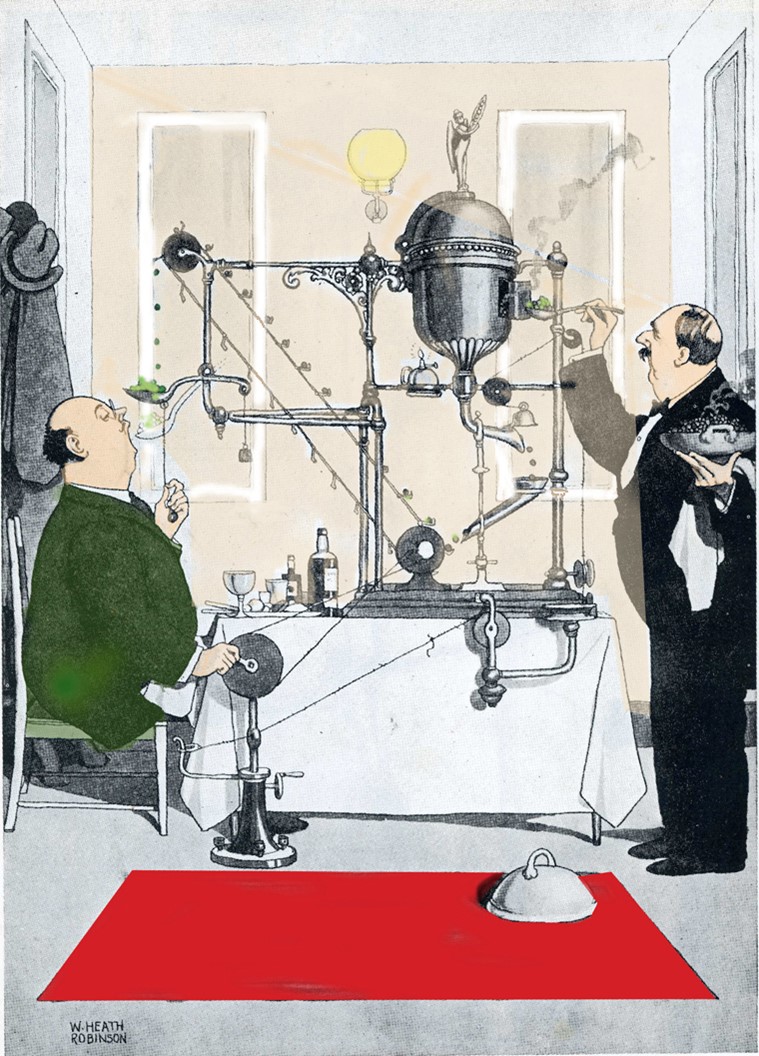 Written by Vanessa Zard on 7th December, 2021. Posted in Blog

Do you find eating peas with a fork tiresome? Insert cooked peas into the pea machine, turn the handle and wait as the peas travel through funnels and pulleys to land on a spoon and pour into your mouth. How simple. How very Heath Robinson!

William Heath Robinson, known by the Press as The Gadget King, was an illustrator renowned for his ability to capture life in the first half of the 20th century and find humour in the growing pains of technological innovation. The brilliance of these drawings explains why he is one of the few artists to have won an entry in the English dictionary. Today, we use his name to describe the marriage of complexity and ingenuity that so often featured in his designs.

Robinson’s path to a career in funny drawings was fittingly incidental. While his initial wish upon leaving art school was to become a landscape painter, this ambition was quickly supplanted by the financial security of book illustration. Robinson won acclaim illustrating fine editions of Rudyard Kipling, Edgar Allan Poe and Hans Christian Andersen. When this market declined, he turned his hand to humorous drawings for magazines such as Tatler and The Sketch and so embarked on his trajectory towards becoming a household name.

The man, the creator, the adjective
Heath Robinson died in 1944 but his influence lives on in popular culture and can be seen in films that entertain millions today. Here are some examples that celebrate the fusion of the complex and ingenious, at which Heath Robinson so gloriously excelled.

Wake-up call
Whatever the task, Heath Robinson always had a way to simplify it. Take getting up in the morning. It would be so much easier if you could automate the whole process. For the 1934 Ideal Home Exhibition at Olympia, an engineering firm built a 2/3-scale Heath Robinson house full of labour-saving contraptions, including one to tip you out of bed, slide you through a trap door and deliver you straight to the breakfast table.

The opening scene of the film Wallace & Gromit: The Wrong Trousers is very Heath Robinson, wouldn’t you say? Every morning Wallace slides through a trap door straight from bed. Momentum eases him into a fresh pair of trousers. The braces break his fall and lower him on to his chair at the breakfast table. All thanks to Gromit pulling a lever in the kitchen after hearing the breakfast alarm. Click here to see for yourself.

Heath Robinson had all sorts of other ideas for easing you into a new day. If you were a heavy sleeper, you could rely on his alarm clock, augmented with trumpets and trombones, to get you out of bed. If you were a natty dresser, you could remove every last crease from your trousers by running a motorized trouser press overnight. To keep costs down, you could use any old rope, the kitchen table, the coal scuttle, the old jalopy and a bit of mechanical imagination to achieve a perfectly pressed appearance.

Heath Robinson’s musical alarm clock will wake even the heaviest sleeper with a rousing blast from the brass section.

Heath Robinson designed a trouser press operated by the opposing forces of gravity and the internal combustion engine.

Acknowledging the debt
Peter Lord, who directed the Wallace & Gromit films at Aardman Animations with Dave Sproxton and Nick Park, first came across Heath Robinson drawings when he was at school. ‘It made a big impact. We loved it. Lots of kids of our age loved it. It had comedy and graphic flair, and that’s what influenced us. What we do is derived from him,’ he says. ‘It’s very Heath Robinson.’ To appreciate the full extent of their debt to the master contraptioneer, watch this video.

Making an entrance
‘Pull the lever Kronk!’ In the Disney comedy The Emperor’s New Groove the evil sorceress Yzma has two levers at the entrance to her secret lair. One leads to the lair, the other opens a trap door for unwanted visitors. Somehow her assistant Kronk always manages to pull the wrong lever, which plunges Yzma into all sorts of unappealing traps such as a crocodile-filled ravine. To see her goings on, follow this link.

Much like Yzma’s preferred method of despatching unwanted visitors through her perilous trap door, Heath Robinson was an advocate of ‘taking the plunge’. He designed a diving boat with a spring-loaded ejector seat for the purpose. Release the cord and you’re gone!

Heath Robinson designed a diving boat to launch reluctant bathers into the water.

A portly gentleman pulls a lever to activate an apparatus for removing a wart from the head.

Brushing up
How pleasant life could be with a few extra gadgets to help you get ready for the day. In the aptly named Disney film Meet the Robinsons, Doris is a bowler hat with arachnoid adaptations. Also known as DOR-15, she can simultaneously brush your teeth, tie your bow tie and hold the mirror up to present the fruits of her labour. How very Heath Robinson! Watch her at work here (time stamp: 2:17).

In Heath Robinson’s time, getting dressed in the morning was considerably more complicated than nowadays. Stretchy fabrics were unknown and trousers were suspended on braces with adjusters to pull them up. You could waste a lot of time getting a comfortable fit and avoiding a lop-sided slant. No worry, thought Heath Robinson. All this bother can be ended with a pair of automated braces. One push of a button and you get a good pull-up. Then you can stride off to work on time.

For men who haven’t the time to fiddle with their trousers, Heath Robinson designed a set of electric braces to pull them up. Much like the mechanisms of DOR-15. Courtesy of The William Heath Robinson Trust.

Order Very Heath Robinson
To see more of Heath Robinson’s comic whimsicality, why not try a compendium of 300 illustrations with a commentary by the science writer and television presenter, Adam Hart-Davis. Escape to analogue heaven and explore the technical and social background from which these humorous drawings grew. Order your copy of Very Heath Robinson here.