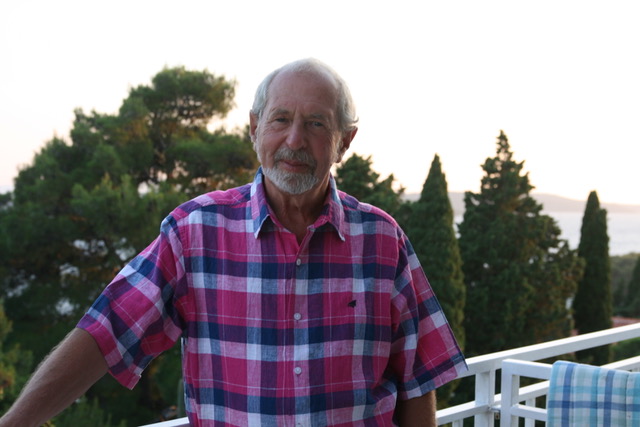 Designer Committed to His Craft

When we commissioned Bernard Higton to design the book that became Logomotive, we never imagined it would be his last. He was a designer committed to his craft, always looking for a new challenge, a turn of the page that would captivate an audience. We are saddened to announce that he has bid us farewell.

‘Horrible. I’ve just been told I have Stage 4 cancer.’

It was Monday 8th March, a month before the publication of Logomotive in the United States. This colourful evocation of American railroad iconography by Ian Logan and Jonathan Glancey had been two and a half years in the making. Now would be the moment when the world got to hear about it. The publicity was just beginning. The planned limited edition was still a set of roughs.

‘I’ve been told I have to get my affairs in order,’ said Bernard. ‘I can’t take on any work.’

Always an optimist, I imagined he might stabilize. As a designer committed to his craft, surely he would get back to his drawing board, finish off the design of the limited edition and do a few other finishing touches here and there. So it came as a big shock when the phone rang on 9th April and a voice not heard in years announced that Bernard had died the morning before. It was Colin Webb, founder of Pavilion Books and Palazzo Editions, who had done many books with Bernard.

The next day we were due to give a presentation on Logomotive at a weekend conference organized by the Center for Railroad Photography & Art in Madison, Wisconsin. Instead of attending and enjoying the plaudits of a discerning international audience, Bernard was commemorated in a final tribute by his fellow design enthusiast, Ian Logan.

Unexpected news
During the time he worked for us, Bernard was never in what you could call rude health. He suffered from COPD, a lung ailment that left him weak and occasionally hospitalized. He had to cancel a planned trip to the USA at the last minute when his doctor told him he was not well enough to fly. So when he was not in top form recently, he put it down to lung problems. He had no idea that he had cancer. That was discovered by chance while he was on a hospital visit and experienced an acute pain his gut. An endoscopy revealed an advanced tumour. The news was so sudden, he told me, it was hard to process. A month later we are processing the news of his passing. We send our deepest condolences to his partner Annie, who has sent us this photograph of Bernard. It stands as a poignant reminder of a respected colleague who survived and thrived in the tumultuous world that is illustrated book publishing.

Battle of the departments
The editorial and art departments are two cultures. Writers and editors lead the way, head down in logic and detail. Art directors and designers bob around in their wake, buffeted, frustrated and often in a silent fury at the inability of barbarian wordsmiths to understand that this picture or that layout will not work.

‘Oh no, you can’t. Don’t make me do that. I won’t do it!’ Bernard would expostulate.

To him, like many other designers, words are a grey splodge which get in the way and potentially ruin a clean design. In Logomotive, it was decided after much controversy that groups of logos should be laid out at intervals on double-page spreads. The editors wrote an introductory text block to explain to the reader how each group was defined. When the first page layouts came back, the text block had become a caption in small type at the bottom of the page. ‘I don’t want the text to interrupt the pictures,’ said Bernard. Actually, it would have been better if there had been no text at all.

The editors protested and persuaded him to move the text to the top of the page and add a heading. For them, it was an improvement but still not sufficient as a signpost. A new battle loomed. The editors realized that these groups of logos could be used as the opening spread of a picture essay running for many pages, in which case the text block would require larger type and a bigger, bolder heading in order to conform with the hierarchy of text laid down in the house style.

‘Oh no,’ Bernard said before the details had even been broached. ‘Don’t make me do it!’

This picture meeting occurred before coronavirus lockdown, so there were seven or eight people seated around the conference table, including both authors. Bernard had already foreseen an editorial assault, a storming of the barricades, some vile insult to the integrity of his design. There was a ghastly hiatus. Breaths held. Anxious looks across the table.

Angry art directors
The folklore of illustrated book publishing is full of denouements at picture meetings: picture researchers in tears, writers and editors trying in vain to get their point across to designers, art directors storming out of the room. One art director at Time-Life Books where I used to work, who shall remain nameless, but he knows who he is, was famously combustible. On one occasion, unable to contain himself, he left the picture room at the front of the building uttering profanities, burst through three editorial offices, strode down a corridor and through to the solidly built Victorian back extension where a kitchen and food photography studio had been set up. In the studio with the door shut we could still hear him yelling.

The nice thing about Bernard, though, was that when he knew he was beaten, suddenly he’d say:

And a few minutes later he’d be making a joke and having a chuckle.

To finish off Logomotive to everyone’s satisfaction, including his own, he produced no less than 22 sets of page proofs. Is that a record? It may well be. He also produced 30 different cover designs before hitting on the one that everyone liked. This is what I mean by a designer committed to his craft.

One battle he won was the decision to use a broken font for the title page and chapter headings. The editors made noises about choosing a recognizable font such as Railroad Roman rather than something no one had ever seen on a locomotive or boxcar. Unfortunately for the editors, Ian Logan sided with Bernard and said he also liked the broken font. And since this was a rare if not unique moment when a group of editors had to face two designers at once, the editors lost. You can see the broken font in the book to this day. To our knowledge, no readers or railfans have objected.

A thrilling achievement
Sadly, I was not able to send Bernard all the fulsome comments his design of the book has elicited. He told me was pleased that Colin Webb, doyen of illustrated book publishing, had called Logomotive fantastic. He’d never heard him ‘expanding’ in that way. Colin has described it to me as ‘absolutely superb’ and ‘a thrilling achievement’.

Let that be Bernard’s epitaph.