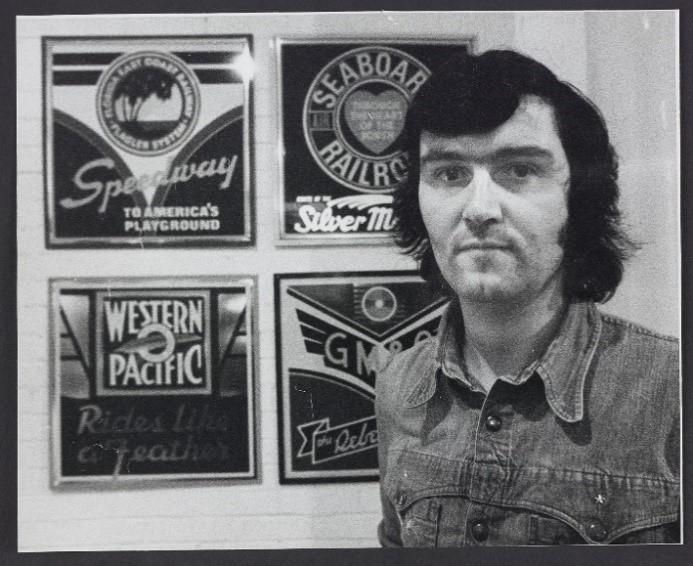 The Secret Romance of Ian Logan

Written by Sheldrake Editor on 21st July, 2020. Posted in News

Meet Ian Logan, designer to the stars and author of our forthcoming book Logomotive. Here he is beside a set of railway signs he designed in the 1970s. Perhaps best known for his tin trays and themed tin boxes, he was blown away by the graphics he saw painted on the side of American trains. He began a secret romance.

Ian Logan was at the centre of the design revolution that marked the end of post-war austerity. In the early Sixties he and a group of textile graduates from Central St Martin’s formed JRM Design, producing prints for up-and-coming fashion designers such as Mary Quant and Jeff Banks.

Ian’s passion for vintage railroad Americana was rooted in a Fifties and Sixties childhood attuned to the sounds of folk, skiffle and blues under the influence of his uncle, Ewan MacColl. It was hearing Lonnie Donegan’s hit ‘Rock Island Line’ on the radio in 1961 that inspired Ian to go to America to see the names, the places and the trains for himself.

A fresh look for interior design
As the Swinging Sixties gathered pace, Ian and his JRM partners created a pioneering line of tin trays. One particularly popular pattern was a Middle Eastern-inspired motif called Salome, first sold in Carnaby Street and then all over the UK. Salome went on to decorate enamelware, saucepans, cushions and tea towels.

In the mid-1970s Ian set off in a new direction. Inspired by Victorian decorative tin boxes, he produced a range of biscuit, tea and sweet tins for Harrods, Fortnum & Mason, Whittard of Chelsea and the National Trust. Commissions came in from France, the Netherlands and the United States, for which he developed the Americana range featuring diners, gasoline stations and collectable cars. His money boxes in the form of the iconic red British telephone box became known all over the world.

Happy families enjoy the American dream in these tin cars.

Passion for Americana
Ian Logan’s secret romance with logos led him to return time after time to America and is now laid bare in Logomotive: Railroad Graphics and the American Dream. You can read about it here.

Order book open
If you like what you see, order Logomotive now.