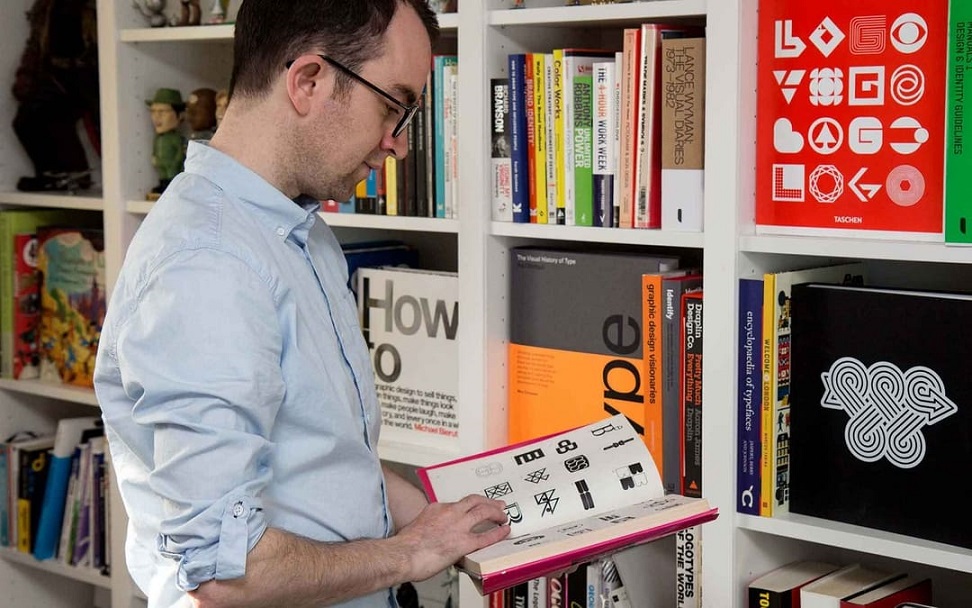 Geek Out With Logo Geek

Written by Figen Gungor on 19th November, 2021. Posted in News

Who’s interested in logos? At least 112.7k people are and they follow Logo Geek, a logo design service provided by Ian Paget. In a new podcast, Ian geeks out for an hour with Ian Logan and Jonathan Glancey, a designer and writer passionate about all things logos and locomotives, to discuss their new book Logomotive.

In his 113th podcast, Ian Paget talks logos with the authors of Logomotive. Click the image to listen to the conversation.

You can now listen to Ian Paget’s interview with Ian Logan and Jonathan Glancey as they discuss Logomotive, the story of some of rail history’s best-loved logos. These graphics have weathered the harsh conditions of the United States and evoke fond memories of a pioneering age. To discover their charm, click here or on the picture. Alternatively, find Logo Geek on your chosen podcast platform.

Who is Logo Geek?
Logo Geek was founded in 2011 by Ian Paget, a graphic designer from Manchester UK. What started out as a passionate side project, offering services to friends and family, soon became a brand as Ian took on professional clients. Ian uses social media to propel his business and support those who wish to break into the industry. He boasts a following of 96.7k followers on Twitter, 9k on Instagram and 7k on Facebook. That’s something to geek out about.

Self-taught to self-made
Ian Paget was always creative at heart. As a child he won art competitions and took A levels in Art and Design. Scared off by tuition fees, he left formal education at the age of 18, optimistic he could find a role in business indirectly linked to design.

Ian Paget gets his pencil out to sketch new logo ideas.

After working in a medical company’s warehouse for a few months and progressing to team leader, Ian mentioned his dream of becoming a graphic designer. This led to him being offered a three-week trial in the Product Support department. By trial and error, he put together leaflets, posters and illustrations. Having proved himself, he was sent for design training with a local print company and ended up managing an internal design team.

After five years, Ian moved on to work as Lead Creative Designer at an agency building e-commerce websites and rose to Design Director whilst working part-time on Logo Geek. A year ago he set up on his own. Ian has become a recognized name in the industry, showing up as one of the top five Google search results for the term logo design service.

Logo Geek is more than just a service, it’s a community providing new designers with a wealth of information. Through Ian’s podcasts they can hear experts talking about their craft. Through his blog they can read up on new technology and software. Through his case studies they can follow Ian’s work in progress and study the techniques he uses. To get a feel for what’s going on at Logo Geek, click here.

Here are a few of the classic logos photographed by Ian Logan on the sides of rusty boxcars.

‘We were chatting to some guys in a bar,’ recalls Ian Logan, ‘when the glasses started to rattle on the table and I heard a train approaching.’ He rushed out to see the train coming down the middle of the street emblazoned with the name Rock Island. For Ian, on his first trip to the United States, this was the start of a lifelong graphic romance. One of the wagons was painted with a big circle with a heart in the middle and the slogan, Through the Heart of the South. ‘What a logo! I’d never seen anything like it.’

In that moment Ian Logan became a logo spotter. During the 1960s and 1970s he made numerous return trips photographing the bold, energetic railroad graphics he found painted on locomotives, wagons and guard’s vans. His 35 mm transparencies are now a valuable historical archive. Over the years he has built up a collection of related magazines and newspapers, letterheads, timetables, brochures, matchbooks, ashtrays, badges, posters and postcards. Together they form a visual feast, a salute in his own words to ‘the most exciting collection of graphic imagery ever to have been produced in this field anywhere in the world’.

Ian calls these stunning logos supergraphics, by which he means logos that are decorative in style, fiercely bold in their colour choice and typographic design, capturing the very spirit of their companies. Logomotive is Ian’s celebration of logo design during a period of intense commercial rivalry, bringing ‘together for the first time a history of corporate liveries of the American railroad that paved the way for today’s branding industry’, to quote Nick Smith from E&T magazine.

To this cornucopia of vintage railroad graphics, the distinguished design commentator Jonathan Glancey – another lifelong railway enthusiast – brings a well-informed, perceptive analysis of its iconography, of the way every aspect of the railroads, from the locomotives and rolling stock to architecture, advertisements and timetables, was designed to project an image of speed, efficiency, adventure and the American dream.

Click to read more about the designer Ian Logan and writer Jonathan Glancey.

Order Logomotive
To get a copy of Logomotive: Railroad Graphics and the American Dream in the UK, click here. In the US and Canada, order from here.